Learn how this 19-year-old entrepreneur went straight from JC to selling 1,000 bags in a month!

Learn how this 19-year-old entrepreneur went straight from JC to selling 1,000 bags in a month!

At the inaugural National Youth Entrepreneurship Awards  in November 2017, one of our SMU students, Mandy Chan, won the GOLD award in the University category for BOW, a start-up she founded in 2016. This was no small feat.. Mandy had taken a gap year from SMU business school and sourced for suppliers and partners from scratch, shortly after she finished her A Levels.

Today, BOW is a successful online store which sells travel bags and accessories; with their recent $60 thousand dollar Kickstarter success on their flagship product “Quiver”. To better understand her success, we interviewed Mandy about the gripes and difficulties she faced in her entrepreneurial journey. Mandy has always enjoyed working amongst entrepreneurs. She took her first step in Junior College by helping out in the Youth Entrepreneurship Symposium. From there she networked with innumerable local entrepreneurs, one of which was Advo Pte Ltd, a Singapore education start-up. This experience inspired Mandy to create something of her own.

After her internships with Advo, Mandy began searching for the backbone of what would form her core business. Mandy identified a problem she faced daily: she always hauled around a bulky heavy backpack. She started to explore whether this pain point was also shared by others.

The Raffles Place MRT is always a hive of activities with pushcart peddlers, roadshow salespeople and crowds of white-collar workers. Mandy spent hours there, weighing the bags of random passers-by with a portable scale. Through that unconventional “survey”, she was able to conclude that “everyone basically carried a sack of rice”.

Placing her education on hold, Mandy took a gap year before her first year in SMU, concentrating her efforts on prototyping whilst her peers embarked on their first few months of university classes.  She often bounced ideas back and forth with her mentor Ken Oh, founder of Advo Pte Ltd, whom she met interning for his education start-up. He continued to mentor her as she started on her own entrepreneurial journey.

“My first product was a professional trolley bag. After testing it for months and months, I realised no one wanted it, and the price tag for the bag mold was $20,000,” said Mandy. “From there I used the prototype, called it a sweat bag, and my journey began. Not long after, I realised that if I wanted to start a product innovation start-up, I needed a designer on board, so that’s when my mentor introduced me to my future business partner, Choon Kiat (CK).” “My first meeting with CK did not go as well as expected. He came in with an expectation of me and the business and was initially sceptical. We quickly built chemistry after several experiences together, we knew it could work out.” With the newfound partnership established, the duo soon turned their eyes towards bag suppliers.

Her search efforts had narrowed the most capable and reliable factories in China, and that’s the first time she learned of using WeChat to communicate with the manufacturers. Mandy planned to travel to inspect their viability, however, the 3,800km distance was not the only thing that stood her way.

“My parents had set their foot down if I wanted to stop studying and start my own business.
I was on my own, so I emptied all my savings and travelled to China."

“My parents had set their foot down if I wanted to stop studying and start my own business. I was on my own, so I emptied all my savings and travelled to China,” Mandy recounts. First-time travellers to China might have found it daunting. Not only was it Mandy’s first time in the country, but she was also alone, with limited time and money, and traveling on 14-hour train journeys in cabins full of strangers and meeting suppliers of “questionable” backgrounds.

“At one factory, the prototyping master kept insisting what we wanted was impossible. It got to the point where I felt like the prototyping master after showing him alternative, new and different methods of how the bags could be made,” Mandy shared. She came to the realization that rapport between parties was what would make or break her business, ultimately partnering with a different supplier.

Upon returning to Singapore, Mandy continued prototyping and iterating until she had her first viable design. In June 2016, the first boxes of bags arrived and Mandy could finally start selling. 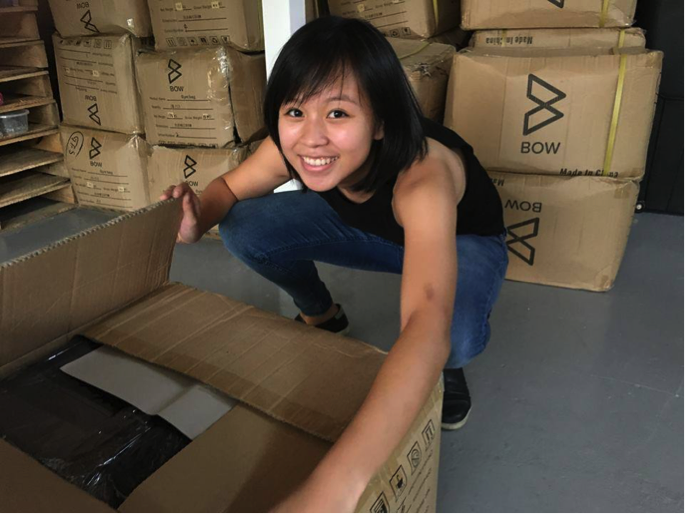 Mandy’s mentor made a bet with her: if she was able to sell one thousand units of her bags in a month, he’d give her $5000 in seed capital. If she failed, she would pay him $2500. Mandy accepted the wager.

She recounted, “To hit our target, we contacted gyms, went door to door, emailed and called whoever we could. We set up booths, stalls, and sought partnership opportunities.” Mandy shared that prior to this, she had zero sales experience. “On the last day, I was on the street making sales myself. One of my most memorable experience was with another street peddler: I bought the Fish and Co. vouchers he was selling and in turn, he bought my bag,” said Mandy, chortling at her recollection.  Throughout the sales campaign, BOW was able to collaborate with Anytime Fitness, Rock the Naked Truth and nEbO, amongst others promotional partners. Following a successful sales campaign, and winning the bet with her mentor, Mandy went on to launch her current flagship product, Quiver, on Kickstarter. “Back then, I wanted to start marketing campaign for my bag, at the same time I felt it was time to test my bag concept on an international level,” said Mandy when questioned why she started her crowdfunding campaign on Kickstarter. The campaign exceeded its target by 400%, raising a total of $60,983. Fully funded on the 6th day of the campaign, Quiver’s main bulk of initial funding flooded in on the second day, the first day having no backers. “We messed up. [Not realising] 12 noon in Singapore is actually 12 midnight in the US, we launched at 11am in Singapore, so our first day ended within the hour,” said Mandy regretfully. Even with this speedbump, Mandy attributed Quiver’s eventual success   to their pre-Kickstarter online marketing efforts, as well as consistently notifying her supporters months before the campaign.

In October 2017, BOW incorporated a social element to their business, donating 20% to the Breast Cancer Foundation with each bag sold in the “Pink Survivor” series. We asked Mandy what how she decided on this cause.

“After talking to Elim Chew, she said that if we just sold a bag, people were going to judge it for its functionality or aesthetics, and ultimately it would just be a bag. However, when you pack a meaning to it, then it becomes a different product entirely, “said Mandy. As an ardent supporter of breast cancer awareness, Mandy gravitated towards the Peddlers, in the Pink; a team of dragon boaters who were breast cancer survivors. Their vigour and aggressiveness left Mandy in awe and inspired her to start this campaign.

Moving forward BOW plans to launch more travel and sports related gear in February and October 2018 with more upcoming Kickstarter campaigns. She hopes to collaborate with named designers and larger companies in the near future.

Mandy is also always on the lookout for interns! If interested, contact her Mandy [at] bowforbold.com (here).